The present Holy Trinity was built in 1820 at a cost of £7,295. It was a time of extensive church building, and the new church was not constructed to a high standard to save money. The architect was Robert Cornish who produced a simple, gothic style with a castellated top that according to White’s Devonshire Directory, in 1850 ‘has about 1000 sittings, of which nearly 100 are free’. The turret contains a clock and bell cast by Mears in 1820 especially for the church.

The interior consisted of a chancel, nave, aisles a west porch and a small western turret. The stained east window was a memorial to Richard Durant and his wife. In 1884, the church was reseated at a cost of £900, and a new pulpit and and prayer desk of carved oak were installed. The register dates from 1605 for the previous St James’ Church and George’s.

The church closed and was taken over by the White Ensign Club in 1977 as a meeting place and social club. There is a large model of the York Class HMS Exeter on display and other HMS Exeter memorabilia. 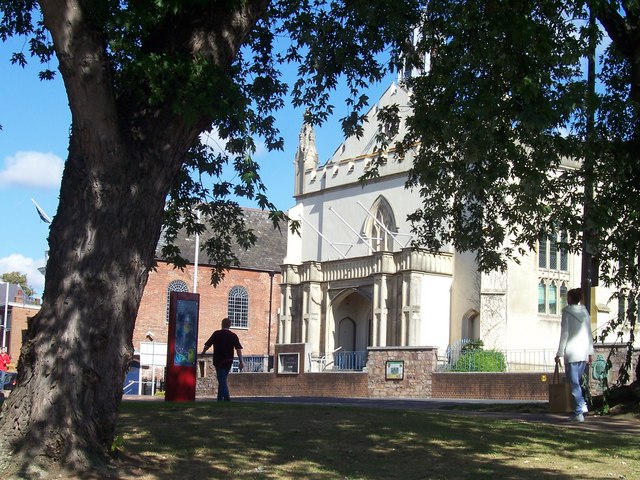 The building currently housing the EXETER WHITE ENSIGN CLUB was formerly a Church known as “The Holy Trinity Church”, but this whole area around the building has a much earlier history.

The plaque fixed on the wall outside the Club shows where the Medieval South Gate stood. Records show that as far back as the year 1312 a Church was located alongside the South Gate, as was the notorious Kings Prison. This prison was used to house felons and debtors, the prisoners being kept in cells under which an open sewer flowed.

Prisoners were occasionally allowed to beg for alms from an upper storey room, this being accomplished by dangling a shoe on a piece of string to the passers-by down in the street below – giving rise to the expression ‘living on a shoestring’. No wonder this prison was once described as “The most disgusting and disgraceful in the land”.

The South Gate was one of the gates, which, as openings in the City wall, gave access to the old city.

Many books on the history of Exeter depict varying pictures of how the South Gate area looked. One picture shows “The surrender to the Parliamentarians at the South Gate” on 13th April 1646. The South Gate as a building was removed in 1819 as was the prison and the original Holy Trinity Church of that site.

In 1820 the foundation stone for the next Holy Trinity Church was laid. This is now our Club-House and appropriately named ‘Trinity House‘.

Just about every church has its own graveyard and The Holy Trinity was no exception. To the rear of the building, at the eastern end, there is still a small piece of deconsecrated ground, still with tomb-stones and even one of the very old above-ground tombs. Some date back to the 1840’s. –

More interestingly is the now long-gone graveyard that was on the Southern side of the church, where the grass piece now lies and the area of the cycleway and footpath towards the Crest Forte Hotel.

Amongst the graves here were to be found a small family cemetery in which a certain Rear Admiral Francis Godolphin Bond who died on 26 October 1880, his wife Sophia, who died on 2 February 1870 and their daughter Margaret who died on 3 February 1831 lay.

Rear Admiral Bond was related to Captain Bligh, skipper of the “Bounty” on which the famous mutiny took place. So it would appear that the old church always had naval connections.

This graveyard was removed by the City Council in l987-88 and the remains were reinterred at the Higher Cemetery, Pinhoe Road.

With the clearance of the slum areas of Exeter and the West Quarter in the 1930’s and road improvements, the church attendances steadily declined and in 1969 the Parish was united with neighbouring St Leonards, and ‘The Trinity’ was deconsecrated. For almost 20 years it lay empty and was allowed to deteriorate into a derelict wreck.

NAVY TO THE RESCUE

It was in the late 1970’s when The Exeter & District White Ensign Club, as it was then known, held their meetings in various locations such as The Globe in Newtown and The Queen Victoria Inn in Tudor Street, that minutes of these meeting show a marked interest in obtaining a building of their own.

In 1977 the City Council had a road-widening scheme for the area which would include the demolition of the Church. When this scheme was abandoned the Church which was rapidly becoming an eyesore was offered up for lease to any interested party. Here was the chance that the White Ensign Club had longed for.

After long and protracted negotiations, raising of the necessary finances for the conversion work, on 23rd May 1979 the Exeter & District White Ensign Club was granted a 50 year lease on the Church. Conversion work was now undertaken in earnest. Whilst some professional contractors were employed, the vast majority of the conversion was done by members themselves from a variety of trades and backgrounds at the same time having to raise all the necessary funds to complete the project.

Being a Naval Club one would expect to find it appropriately decorated. Many of the artefacts within the Club have interesting historical naval backgrounds.

The Club has always had a close association with the City of Exeter and the H.M.Ships that have born the City’s name.

On behalf of the City, the Club are the honoured custodians of the large scale model of the Fourth H.M.S.EXETER, Cathedral Class Cruiser, of the Battle of River Plate fame. This model which took fifteen months to build was made by Mr Ernest P.G. Oddy of Exeter and was presented to the City in June 1934. Many articles associated with that famous ship have been collected or donated. These include a ships bridge telephone, now mounted on a plinth, which was damaged during the battle. We have the Cruisers Bell dating from 1931 when she was commissioned and also the remains of the EXETER’s Battle Ensign and its replacement flown at the River Plate.

H.M.S.EXETER was sunk on 1st March 1942 during the Battle of the Java Sea.

A glass cabinet contains articles used by survivors of the EXETER in the Japanese P.O.W camp in Makassar for which the Club are the custodians on behalf of the City.

All around the walls are plaques of ships going back as far as WW1 showing how great the Britannic Navy once was. One plaque most treasured is of the Royal Yacht “Britannia”, this is positioned over the bar.

Various sections of the main hall are dedicated to branches of the Navy and each show in their own particular way the parts they played in Naval history. Such is the collection held by the Club that many items remain boxed due to lack of space, so from time to time the pictures are rotated and others hung in their place.

We have a Rum Barrel, from which crews once drew their rum ration, a tradition that was abolished in 1971. On appropriate occasions this barrel is still brought into use.

From H.M.S. Victory, the Flagship of the Royal Navy, we have a Signal Gun which Club members restored. It is one of a pair, the other being with the Royal Albert Memorial Museum in Queen Street.

At the main entrance to the club you will see the “Battle Honours” board of H.M.S. EAGLE which was the ship that was adopted by the City of Exeter from 1953 to 1972.

The Mountbatten Lounge is named after the great man himself who had agreed to commission the room before his untimely death at Sligo Bay.

Upstairs has yet to be developed for general Club use, but one day in the not too distant future this part of the building may also play its part in displaying more of the items held.

WHO USES THE CLUB

Until February 1996 the Club was a purely Naval ex-servicepersons Club. With the change to the Membership rules, which now permit membership by those who have served in the other Services, The Exeter White Ensign Club can now rightfully claim to be the premier Ex Services Club in Exeter.

Associations who use or meet in the Club are :-

Other Associations that meet but less frequently are :- 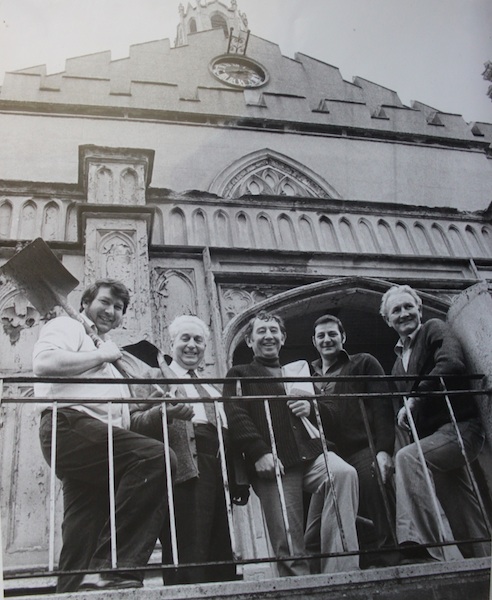 Some founder members of the club